What is this Great Reset?

We all need to understand that this Great Reset was not just suddenly dreamt up because the world was suffering from an alleged pandemic.  This is not some sudden and philanthropic push by the world’s wealthiest and most powerful people to rescue humanity and to return everything back to the old ‘normal’ before COVID-19. In other words, they are definitely not seeking to push the clock back two years and to restore business as usual.

No, this is the most dangerous and far-reaching initiative that has ever emerged from the portals of institutions that are supposedly working for international cooperation, prosperity and peace.  We are now looking at the beginnings of an unelected and unaccountable ‘one world government’ that harnesses cutting-edge and invasive surveillance technologies in order to bring us all under the banners of the carefully planned Fourth Industrial Revolution, the United Nations Agenda 2030 and the Green New Deal.

This sugar-coated pill of ‘recovery’ for the human race is deadly poisonous. It will bring about the end of sovereign states. It will see the final ‘lockdown’ of humanity into a dark future of global and fake green fascism that will dwarf the very worst that the cruellest dictators of history could ever impose. We all have a duty to fight this by waking up and coming together regardless of race, creed, colour or perceived social standing. We have to become a linear people’s movement armed with the just one proverbial song sheet—the song sheet that has the clear and proven solutions needed to give us all real freedom, real health, real justice and real prosperity.

So, what are the roots of this evil that’s planned for the human race? The bones of this global agenda go way back to the Technocracy Movement of the 1930s, started at Columbia University in New York, where Zbigniew Brzezinski and David Rockefeller collaborated with technocrats and political scientists who were disillusioned with politicians and economists after the great depression. They planned a new energy-based economy, rather than a priced-based economy. It didn’t really get off the ground due to the beginning of World War Two.

However, the seeds of what became known as ‘sustainable development’ were sown. The leading players, Zbigniew Brzezinski, Klaus Schwab and David Rockefeller, were all members of the Club of Rome, the Trilateral Commission and the Bilderberg Group. These shady and secretive organizations are the real power base behind UN Agenda 2030, the fake Green New Deal and now the Great Reset with its Fourth Industrial Revolution.

In 1970 Brzezinski wrote a book entitled Between Two Ages: America’s Role in the Technetronic Era and revived this doctrine, with Klaus Schwab and David Rockefeller, by creating the World Economic Forum (WEF), so as to bring this ideology slowly into being by holding semi-secret meetings with world leaders at Davos every year. This has now gone on annually since 1974. 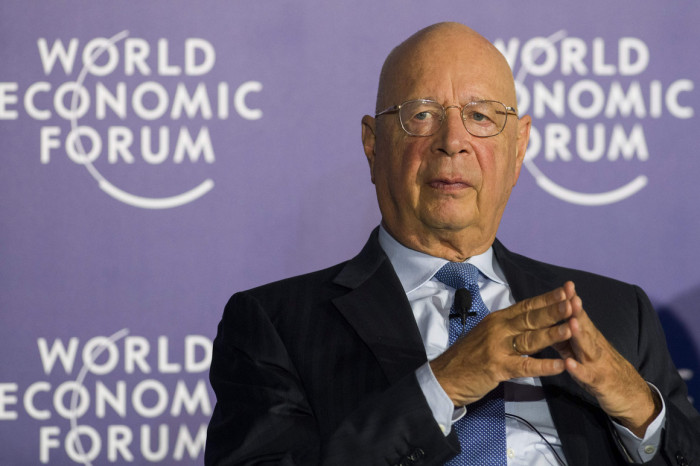 The Great Reset personified—Klaus Schwab looks every inch a Bond villain… but where’s his white cat?

Schwab and Brzezinski nurtured trade relationships with communist Chinese leaders to normalize the US relationship with China. Before 1973 it was illegal to do business with China or Russia, as they were communist countries, but the technocrats needed Chinese cheap labour to develop the technologies needed for the Fourth Industrial Revolution. Also, the autocratic political system in China appealed to Schwab and Brzezinski.

The Great Reset (which is essentially Klaus Schwab’s Fourth Industrial Revolution) is of a scale, speed and complexity that is unprecedented. It is characterized by a fusion of technologies—such as artificial intelligence, gene editing and advanced robotics—that is blurring the lines between the physical, digital and biological worlds. It will disrupt nearly every industry in every country, it will herald the end of the priced-based economy that we have now, and the end of small businesses and free enterprise globally. It is a re-branding of UN Agenda 2030 with the endgame being a society that lives in technocratic, high-density, high-surveillance urban environments called ‘Smart Cities’.

The 17 Sustainable Development Goals of UN Agenda 2030 (2015) are now conveniently woven into Klaus Schwab’s Great Reset: everything is carefully planned and choreographed from behind the scenes.

The UN list of concerns looks fantastic… but it’s a mask that hides a very dark future for all of us.

In June 2019, before the ‘pandemic’ was declared, the World Economic Forum and the United Nations signed a deal to accelerate these 17 Sustainable Development Goals of Agenda 2030 in New York. It was entitled The Strategic Partnership Framework and was between António Guterres (United Nations Secretary General) and Klaus Schwab (WEF).

For years now, the United Nations has tried to fulfil these 17 Goals by using the threat of climate change, formerly called man-made global warming (more on this later). Greta Thunberg and Extinction Rebellion had lost traction with public opinion during the summer of 2019 and the planned agenda was not moving fast enough.

In fact, the WEF says that the pandemic “has presented a great opportunity to bring about social change that will re-engineer the whole of society” But the best quote came from Klaus Schwab himself when he said that by 2030, “you’ll own nothing and you’ll be happy about it”. Doesn’t that perhaps make us all wonder: who then is to own the world?

On October 18th 2019, the WEF, along with the Bill and Melinda Gates Foundation and the Johns Hopkins Center for Health Security, held a three-and-a-half-hour pandemic tabletop exercise at the Pierre Hotel in New York for one hundred and fifty invited guests (video highlights here). Called Event 201, this was a ‘what if?’ predictive programming exercise, about a deadly virus that emerges from a wet market in a developing country, that spreads to create a global pandemic requiring a full vaccine roll out by the Bill and Melinda Gates Foundation. This was just over two months before ‘Covid-19’ appeared in Wuhan. What a coincidence you might think! Yes, what a coincidence!

If you go onto the WEF website, they inform you that Gross Domestic Product (GDP) is a thing of the past and will be replaced by a new economy, an economy that’s based on ‘green’ taxes and data-driven surveillance using ‘impact investing’ and ‘human capital bonds’, all linked to the blockchain, something akin to the Chinese social credit system. They call it Stakeholder Capitalism, where the human is the sole commodity as there will be no free enterprise or a price-based economy anymore, and private property will be a thing of the past!

The current lockdown has caused the biggest collapse of GDP in the UK for 300 years. This is part of the completely planned and contrived crash of the global economy to bring about the total control of society and the dependence of everyone on handouts from the State (this is particularly noticeable at the moment as ‘liberal-minded’ decision-makers start to embrace the concept of the Universal Basic Income)  Eventually, if they have their way, we will see all of us data-harvested from cradle to grave and our outcomes traded like futures on the financial markets with our children being forced to take part in machine-driven distance learning for this very purpose. We only exist to become their slaves and their property! The State knows best! Do not question! Obey!

The current system isn’t perfect, and many people are seeing the Great Reset as a positive move against Capitalism. But what these unbelievably arrogant and evil technocrats have planned for us is far worse, with scary top-down control over everything, including the human condition. They peddle a ‘green utopia’ but, in reality, it’s a technocratic dystopia which will have the human being merged with artificial intelligence via something called ‘The Internet of Bodies’.

This nightmare agenda is anti-human and anti-nature. It may, if left unchecked, ultimately lead to transhumanism, genocide, and the end of the biological human-being! We will exist as part machine and part human—a cyborg!

The WEF’s often-repeated mantra of ‘Build Back Better’ to promote the Great Reset (a phrase used by Boris Johnson twice at Prime Minister’s Questions on March 3rd to confirm the psychological programming that’s now being undertaken to prepare us all for what’s coming) is predicated on the fact that nearly everything that is in existence now to make our lives largely independent, tolerable and pleasant will have to be changed, reduced or destroyed. And we are starting to see this actually happen before our very eyes! In forcing small and medium-sized businesses to close and to go bust, the world’s richest corporations and multi-billionaires have become 30% richer since these lockdowns began. The tiny few will just get richer, the rest of us will just be made completely dependent upon the State for their handouts.

This Build Back Better agenda doesn’t represent us, the people. It is a form of neo-feudalism. If we don’t own anything and we rent everything (homes, cars, white goods, TVs etc.), to whom are we paying this rent?

To read more about how this Great Reset came about, please go to www.sandiadams.net.