As our daily lives and personal freedoms continue at an ever-increasing rate to be locked down and changed beyond all recognition, and as draconian legislation is brought in to pave the way for what the corporate megalomaniacs have got planned for all of us with their Great Reset, to give the whole world a New Normal, it is now essential that we convince the British people that we are all under attack like never before.

The solution to all of this is blindingly obvious!  We, the proverbial 99%, have got to unite quickly right across the political spectrum to win back our ancient freedoms, restore our prosperity and resume as quickly as possible with our ‘normal’ way of life.

However, our biggest problem in achieving this is clearly the fear-programming that the entire nation is now being increasingly subjected to on a daily basis. Indeed, the intensity of the propaganda coming out from our government today makes Joseph Goebbels look like a rank amateur with his efforts to keep Hitler popular with his people!  What we are witnessing today is the deliberate mass manipulation and deception of the British people in a way that is completely unacceptable for a supposedly open and transparent democracy such as ours.

From the Cabinet Office, with its use of the Behavioural Insights Team and the British Army’s 77 Brigade, to the BBC, ITV and almost all of the mainstream media, we are seeing a carefully designed and orchestrated psychological attack being rolled out upon the British people to convince them that from now on there has to be this New Normal for the health and well-being of everyone and that our lives have to be changed forever.  There is, apparently, absolutely no choice in this matter! The State knows best. We are to comply with their will. Any deviation from the official narrative and any questioning of the actions being taken by the Government, and you are classed as a ‘conspiracy theorist’.  In fact, as the deep state’s desperation increases and becomes more obvious, there are clear moves to relabel ‘conspiracy theorists’ as potential ‘domestic terrorists’, as has happened in the United States.

This attack upon our freedoms takes many different forms.  If you want just one example, then let’s take a look at a certain Professor Susan Michie. She is a British psychologist and political activist who is Professor of Health Psychology at University College London. She is Director of UCL’s Centre for Behaviour Change and of its Health Psychology Research Group. According to Wikipedia, she is a member of the COVID-19 Behavioural Science Advisory Group and the Scientific Pandemic Influenza Group on Behaviours, a sub-group of the Government’s Scientific Advisory Group for Emergencies (SAGE). She also sits on the Independent SAGE committee, chaired by Sir David King (a man also with an ‘interesting’ agenda, including SMART cities and Climate Change). However, she is also a fully paid-up member of the British Communist Party with its Marxist-Leninist vision of full state control over everything!  Absolutely nothing to worry about here, is there? 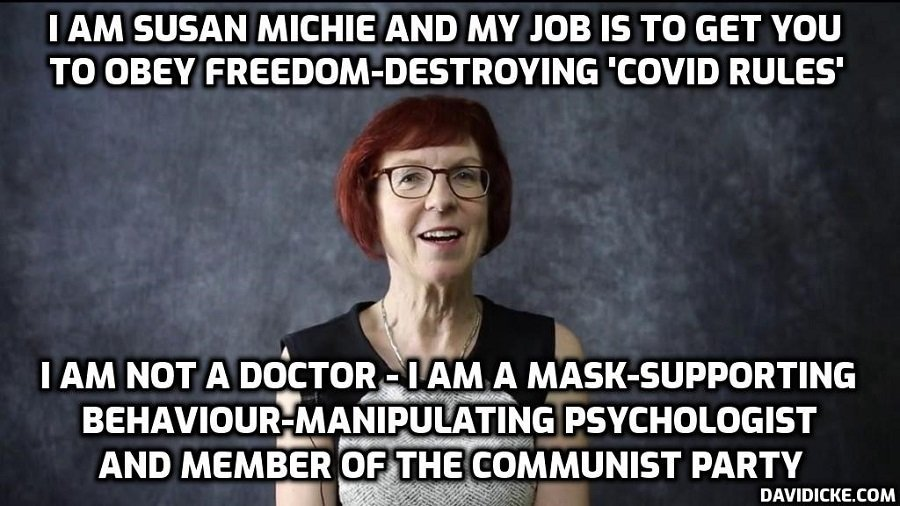 It’s hard to say how the government’s propaganda is doing at the moment and how many people are actually falling for this deliberate and fear-based psychological attack upon the nation to bring in this ‘New Normal’. At the time of writing (February 2021), our guesstimate would be that around ten percent of the population, in varying degrees, smell a definite rat and that Her Majesty’s Government can no longer be trusted as it pursues what appears to be a far greater and more sinister agenda. In other words, a sizeable number of people are starting to see that some of our senior elected servants in Parliament are coming out with nothing but deliberate lies, deception and entrapment… not to mention high treason!

Whilst many within this ten percent bracket are still wearing masks so as to avoid any sort of open conflict with ‘authority’, we can see that there is a growing scepticism about the medical science we’re being told, particularly about the safety and efficacy of the so-called ‘vaccines’ being rolled out. And this number will only increase considerably as more and more people become concerned about the massive corporate censorship and cover-up being conducted by the ‘tech giants’, especially the likes of Facebook, Twitter, YouTube and Google, against anyone challenging the official narrative, particularly when calling into question the efficacy and safety of vaccines. Not since the burning of influential and controversial books in Nazi Germany has anything been more blatant!

Starting at the top with the World Health Organisation itself, the deep state cannot afford any sort of balanced public debate; they have to resort to outright censorship to support their lies and to prevent the truth from ever coming out.

At the other end of the scale of public opinion, there are the COVID zealots who buy into every aspect of the government’s propaganda campaign and who tune in to the daily briefings, hanging on every word uttered by the government’s so-called ‘scientific advisors’. They totally support the ‘lock downs’ and go to the shops dressed as if they were visiting Chernobyl. And some of them are happy to snitch on their neighbours should it be necessary. These are the fear junkies!  And these are the people who seem to appear regularly on our TV screens, promoting and upping the fear needed to keep the government’s plan for the Great Reset right on track. These close-minded fear-mongers will be quite hostile to any evidence that forces them to start thinking for themselves.  Some severe cases of cognitive dissonance are to be expected! 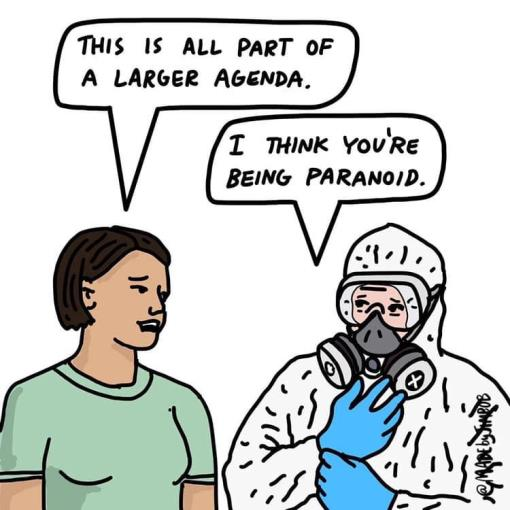 To research more on this psychological attack that our nation is currently experiencing, please use these links to see an excellent and more detailed analysis: